with particular reference to differences in Canadian and American issues.
by Colin J. Bray and Jack Litchfield

[This article appeared in the "International Discographer" and the CAPS newsletter, Toronto, with pictures and some U.S.A. content added by Gary Herzenstiel.

Bluebird records were issued in both Canada and the U.S.A., using several label types. The various types were not used at the same time in Canada and the U.S.A. This article is an attempt to pin down more accurately when they were used. More specifically it concerns the 10" popular series which ran from 1933 to 1945, although other series will be mentioned later in this article. There was another Blue Bird label (note spelling) which was a Paramount derivative from the 1921-22 period but this is not part of our study. We are concerned only with the Bluebird label derived from the Victor company. 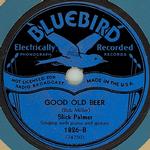 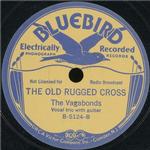 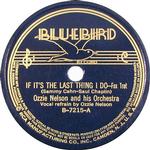 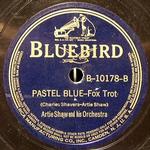 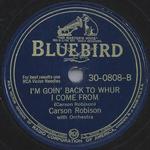 The popular series began in August 1932 at serial number 1800. These were 8" records which changed to 10" at 1810 and continued to 1853 by May, 1933. The colour of the label was dark blue and black. These records were sold only at Woolworth stores. In May, 1933, the numbering system changed to B-5000 and the US "buff" label was introduced and sold through Victor's normal distribution system. Recordings issued initially originated from earlier Victor material and Victor's Electradisk but by 1934 recordings were made exclusively for issue on Bluebird.

From 1946 to 1950 some Bluebird recordings were re-released using the original Bluebird serial number on the RCA Victor label. The notation "Bluebird Series" appeared around the rim of the label. In July 1949 the Bluebird label was revived at 31-0001, and a handful were issued over the next few months.

In the U.S.A., Bluebird had two varieties of the dog label which we call "dog 3" (because it had three lines of type around the bottom of the label) and "dog 2" (two lines). The Dog 2 label occured when the RCA circle logo was added. 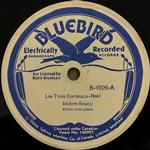 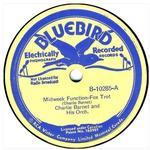 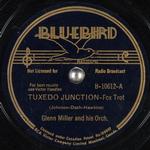 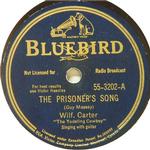 There were several other series which are not included in Figure 1. They are:

In November 1942 Bluebird altered its numerical system to four-figure serials prefixed by a two-figure category code (Rust). Those so far identified are as follows: 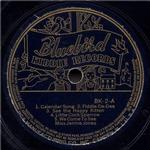 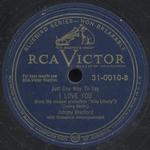 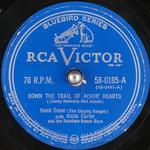 In addition there was also a series of Children's records. These were issued with serial numbers ranging from 1 to 1000 with prefixes which included BK and BY from May 1936 to the early 1950's.

The authors wish to thank Ross Brethour, Gene Miller and Keith Miller for making their record collections available to us, and to Ken Crawford for supplying information from his collection. The following references were consulted during the preparation of this article, as well as several catalogues in the authors' collections: